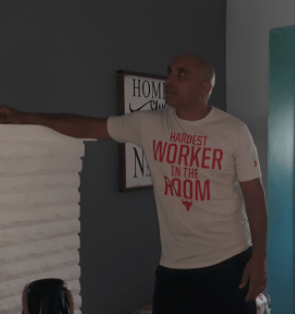 If there’s only one thing you might already know about Dani Valentin, our Regional Sales Executive in Cleveland, it just might be his appreciation for Dwayne ‘The Rock’ Johnson.

“His mentality of being the hardest-working person in the room,” Dani remarked, “I take that to work every single day.”

The more I talked to Dani, the easier that was to believe.  He told me a story about a time he was out of work for a month as a teenager.  He hated it so much that he found an under-the-table gig at a scrapyard until he could land another job.

Years later, Dani’s built up an impressive résumé of working with nonprofits, charter schools, and other community-based initiatives.  Before coming to PCs for People, he spent 11 years at Lutheran Metropolitan Ministry, an organization that helps individuals with criminal backgrounds find employment and job training opportunities.

The way it helped me grow was just getting to know people, Dani said.  That’s my niche.

When it came time for him to seek out other professional opportunities, Dani landed a job at a commercial photo studio.  He says it didn’t provide him with a lot of purpose, but he still needed to provide for his family who, at the time, were looking to purchase a house.

That’s when Bryan Mauk, Executive Director of PCs for People in Ohio, gave Dani a call and offered him a position.  When he accepted, the leadership team wasted no time letting Dani and other recent hires know that they had become part of a very special community.

“Casey [Sorensen, CEO] flew us out to Minnesota to meet the crew,” he said.  “Bringing the staff to his home and cooking for all of us, that’s a great way of introducing people to what PCs for People is.”

Dani says the power to be welcoming and inclusive isn’t something that stops at the CEO.  It’s part of the PCs for People culture itself.  He says the reason he comes into work every day is because he feels empowered in his role.

There’s not that red tape like other organizations where you have to say no all the time, Dani said, We have the power to help as much as we can every day.

Dani’s incredible work ethic, love for people, and ability to help makes him a perfect fit for the job — and he’s loving every minute of it.  Being able to directly see the impact he’s having is what gives him the sense of purpose he was looking for.

“Here, I see the fruits of my labor.  I get to see the whole process,” he said.  Whether it’s building partnerships with corporate leaders, working in the processing facility, driving the truck, or ensuring quality in the retail space, Dani loves to move around and deliver value wherever he can.

“When they told me it was going to be fun, they meant it,” he confessed with a chuckle, telling me that he hardly sits for an hour per day.

Dani says that his most difficult time is coming up, when he’ll take on regional sales for Clevleand, Baltimore, and the 6-hour radiuses surrounding each of them.

Still, it’s hard to imagine that he won’t enjoy stepping up to the challenge.  He’s planning to approach the new role with the same tenacity and dedication he always has.  In Dani’s own words: